We don’t have to work internationally to do important work. Much is being done in our own backyards. This month, board member Judi Jetson shares her local connections…Judy Newland

In 2009, when I joined the staff of a nonprofit called HandMade in America, for the first time my love of textiles merged with my career in economic development. In a world of mass production and throwaways, we found ways to celebrate the rich tradition of craft in Western North Carolina and discovered how the power of the handmade can transform individuals and communities.  We commissioned an economic study that discovered the craft economy contributes more than $200 million a year to the local economy. We built partnerships and economies that were rooted in the culture that nourishes them and taught others – around the US and the world – how to do this too.

It was addictive – working locally with community leaders we received enthusiastic support in the media for recognizing and building on our craft assets. My passion for weaving, spinning and dyeing became fashionable! Next I started a nonprofit called Local Cloth to focus on growing the fiber economy, bringing shepherds together with each other to build their markets, and forming partnerships among farmers and artists and processors to make it possible to buy local textiles. Fashion shows featuring local artists using local materials were popular, and we organized several giving us the opportunity to educate consumers about the local resources and talents. We had sales, organized exhibits and opened a studio where we could teach and show our work.

Then I read about yarnbombing on Facebook and decided to organize a group to yarnbomb my own town – Weaverville, NC. Enthusiastic knitters worked for months making pieces to put sweaters on trees and signs and poles, and then dressed like ninjas to install it in the night. We were asked to yarnbomb the Folk Art Center located on the Blue Ridge Parkway, and parts of downtown Asheville.

Next I heard about Spinzilla and organized a team that spent a week spinning in public – places like the Asheville Welcome Center and Echoview Spinning Mill – which gained a few new spinners and lots more people who know how yarn and cloth are made.

Twenty-seven years ago, I took a beginning weaving class from Deborah Chandler at the Florida Tropical Weavers conference. It was hard and fun – both at the same time – and as the class ended I asked Deborah if she knew of any way I could combine my love of textiles with my work as an economic developer. She thought for a minute and said “I’m not sure, but we’re starting a nonprofit called Weave A Real Peace that you might want to check out,” and then she told me she was moving to Guatemala to build a grassroots economy based on textiles. I joined and enjoyed the newsletter, but never attended a meeting and drifted away. Fast forward to 2011 when WARP held its annual meeting in nearby Black Mountain, NC. I was asked to talk about the work I was doing locally to build the fiber economy and got a warm reception. At the end of the meeting, I realized that WARP members working internationally were doing the same thing I was doing locally. It was an ah-ha moment and realized I had found my tribe.

Wonderful projects surround us if we just look around our neighborhood. The Navajo Quilt Project is one you might consider supporting this holiday season. You can assist by purchasing a tote bag OR send your extra fabrics to quilters on the Navajo reservation who have few resources. 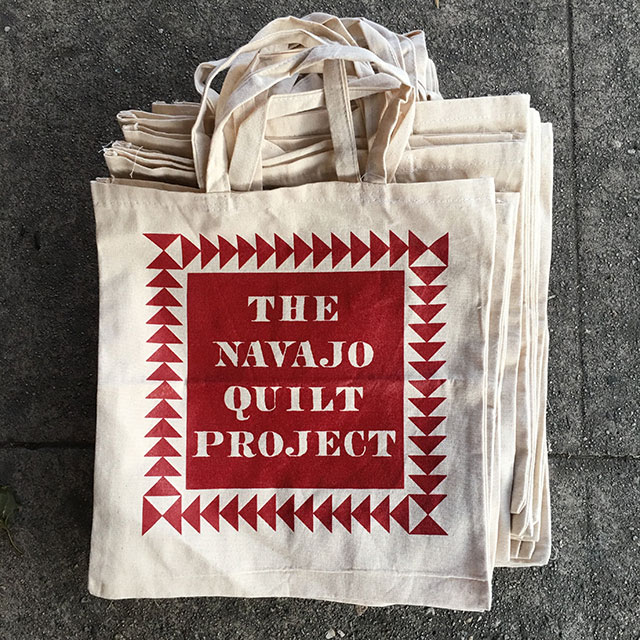 The Navajo Quilt Project aims to collect fabric and quilting supplies for the quilters in the Navajo Nation. With very little access to fabric, scissors, or batting the quilters continue to sew beautiful quilts out of scraps and clothing. Proceeds from this cotton tote will go directly to purchase more materials for the Navajo quilters.

1 thought on “Local Connections – Working in Your Neighborhood”