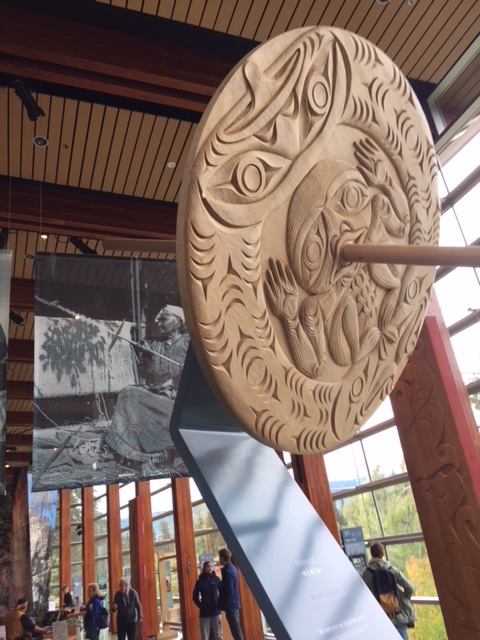 Two WARP members add to the story of making connections, both local and global at the Textile Society of America Symposium in Canada…Judy Newland

The opening plenary and keynote was given by Meghann O’Brien, who described her reconnection with her people and place through her personal discovery of traditional textile and basket making techniques. The closing plenary was delivered by Charllotte Kwon who used her MAIWA vision to demonstrate her version of “Deep Local to Pan Global” while referencing textile communities in India and their commitment to MAIWA and vice versa.

Some sessions prompted heady discussions such as one that evolved into a heated discussion on cultural appropriation and another that tried to help Sumru Krody solve her open-ended research questions.

The evening programs provided visits to the University of British Columbia’s Museum of Anthropology and the Emily Carr University, multiple Gallery Hops and a visit to Granville Island. The pre- and post- symposium events served as icing on the cake and in many cases created intersections among the attendees and people of the First Nations of the region, particularly as they demonstrated commitment to their indigenous craft and design. Teena and Philis Alvic went on the post conference bus tour to Squamish Lil’wat Cultural Centre in Whistler.

Since I was fortunate enough to receive a travel grant from the Great Meadows Foundation in Kentucky to attend the Textile Society conference in Vancouver, I took advantage of pre and post conference activities. Before the conference, I took the WARPS workshop presented by Julie Holyoke, Ruth Scheuing, and Mary Lou Trinkwon and based on Julie’s book, “Digital Jacquard Design.” (Bloomsbury, 2013) In two days, we learned how to design for Jacquard looms and also tried our hands at the very complex loom.

The registration was limited to 10, so we all got to know each other. After the conference, I went on a bus tour to Whistler, a two-hour ride through beautiful country north of Vancouver. First, we visited the Audain Art Museum to view art from coastal British Columbia, which included historic First Nation pieces and works from area artists spanning the last 100 years. Then we went to the Squamish Lil’wat Cultural Centre to learn about the people that inhabited this part of Canada for centuries.

As Teena states, it was an exhilarating conference that covered major and significant topics. Kudos to the organizing committee in Vancouver and to the TSA Board. I agree and hope that WARP and TSA can continue to find ways to collaborate and support artisans everywhere.

Next month, we’ll dig deeper into what “working local” might mean for our members…Judy Newland