“WARP brings together people capable of working with their hearts, hands, and heads . . . They understand the incremental power of the small. And from that understanding comes change and joy.” —Deborah Robson (writer, Colorado) 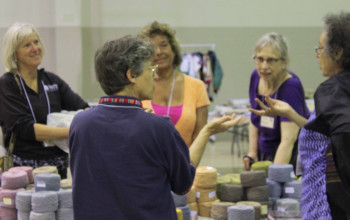 WARP began in 1992 when Deborah Chandler, author of Learning to Weave, contacted friends in the United States who were working with—or had an interest in working with— weavers and dyers in developing countries. Would they would like to get together to share resources, provide support for one another, and exchange stories and experiences? The answer was a resounding yes! These first intrepid weavers gathered in the summer of that same year in Washington, DC, during Convergence, a biennial conference of The Handweaver’s Guild of America, and a new organization was born.

In the Fall, a small group of the original enthusiasts gathered in a high mountain cabin near Kremmling, Colorado, to create a structure for the organization. Built into the gathering was sharing time, slides, stories, hikes in the mountains. This set the stage for a touchstone of the WARP experience—its annual meeting.

Along with Deborah’s originating idea, this organization would also not exist if it weren’t for the tremendous organizational work of Linda Temple, including work that led to WARP being granted its non-profit 501(c)3 status. Linda continues to serve as WARP’s resource-rich newsletter to this day.

WARP is governed by an eight-person board of directors, and has a part-time administrative coordinator. It provides a forum for over 250 members from around the world who value the power of networking around their common interest in textiles as a means for bettering our world.

WARP has stayed true its roots by providing networking opporunities to individuals and organizations working directly with community groups. It has grown to include all textile disciplines, including basketmaking, knitting, crochet, jewlery making, sewing, and many other craft media techniques. In addition to linking members working in developing countries, WARP enables those who cannot work globally to become involved in supporting textile artisans worldwide and right in their own backyards.