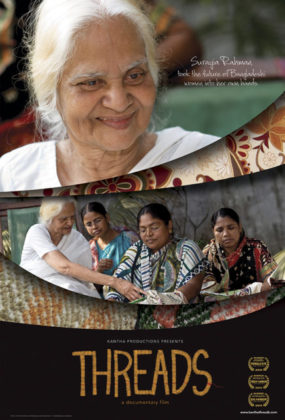 This month I would like to share a blog I recently wrote for ClothRoads about the documentary film project our WARP member, Cathy Stevulak, produced in Bangladesh. Cathy has an article in the current newsletter.

The film THREADS is a story of kantha cloth and women. Kantha is an ancient form of hand-stitch embroidery originating in the Indian sub-continent (Bangladesh, West Bengal and Bihar regions). Kantha refers to the indigenous quilt form and to the running stitch itself, which gives the cloth the wrinkly appearance that is characteristic of kantha. We thought it might be fun to take you behind the scenes to see how this documentary film evolved. 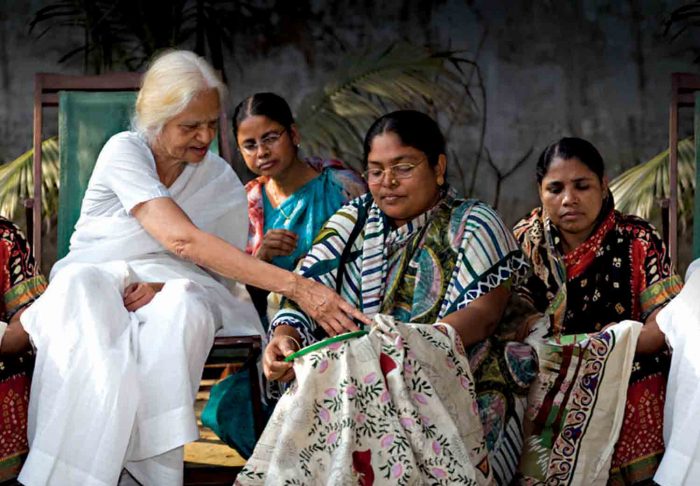 The Making of a Documentary Film

Did you ever wonder how documentary films are made? The vision just seems to appear on the screen as if by magic. The film, THREADS, tells a story of inspiration, determination and liberation about how one woman, Surayia Rahman, transformed the lives of artisan women in Bangladesh. But the production of the film THREADS is also an inspired story put together by a group of dedicated people who succeed through hard work and a little serendipity. This documentary film, by Canadian filmmaker Cathy Stevulak, has an intriguing behind-the-scenes production story.

Good stories do not just fall in one’s lap. Cathy first heard about “ a woman with gray hair who does remarkable embroidery work” from a museum volunteer in a gift shop. She eventually found Surayia during her stay in Bangladesh, but it was years later, after a suggestion by a professor that Cathy began to think about creating a documentary film to help raise awareness of the importance and impact of global artisanship.

Challenges were daunting despite having collected a talented and experienced film crew from Bangladesh. One of the biggest was the fact that Surayia was quite elderly and not in the best of health. She rarely left her house or her favorite chair, so action shots were not in the cards. Gathering the artisans she worked with meant juggling schedules and navigating politically motivated strikes. Surayia’s modest home was surrounded by constant city activity and the noise in Dhaka was ever present. Some sound recording had to be done at night after much of the day’s activity was over.

Searching the world for art

Most of the art Surayia and the artisans had made over the decades had been sold to foreign visitors or gifted by the Government of Bangladesh to dignitaries of other countries. Tracking the art down took four years of detective work. But enough artwork was eventually found on five continents to provide the high quality art images needed for the film. As with so many projects, serendipity came into play time and again. Letters arrived in the mail at just the right time and patrons were found who filled out the storyline.

Why does it matter?

Screenings across the world have inspired others through the story of Surayia and her dedicated group of women artisans. At a screening in Dhaka, a young girl from a poor area wondered if she could learn how to do this “famous kantha”, envisioning a future where she might control her own fate.

Thanks to Cathy and her talented team for this inspiring story.
Read the ClothRoads November 2016 blog to learn more about kantha cloth. And many thanks to ClothRoads for letting me share this wonderful story with WARP members.

1 thought on “The Making of THREADS: Kantha Behind-the-Scenes in Bangladesh”