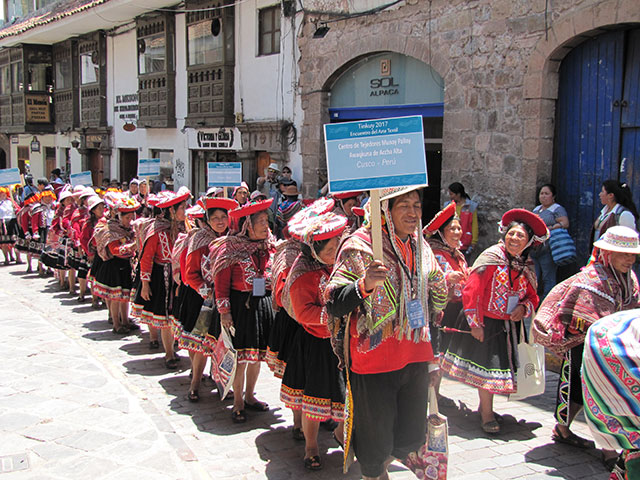 Tinkuy 2017, celebrated in Cusco, Peru from November 8 until November 11, began with the much anticipated parade from the Centro de Textiles Tradicionales del Cusco to the Convention Centre, where the meeting was to be held. The colorful display of tradition and exuberance was clearly felt far beyond those attending the meeting. Citizens of the Cusco region and tourists alike stopped in their tracks to watch the prideful display of traditional textile techniques, many originating from far beyond the Peruvian border.

This, the third Tinkuy, came with notable additions. Formerly subtitled the “Gathering of the Weavers”, this year it was called the “Gathering of the Textile Arts”, which meant that embroiderers and specialty dyers were included in the celebration. Also, as if celebrating traditional techniques was not enough, this year the underlying theme included celebrating the continuation of tradition by including the youth. Lectures and discussion often involved ways that village members are transmitting technical information to the younger generation and also talking about how the social relevance is conveyed and maintained. Many young people attended the meeting, particularly on the last day of the conference which included a “Passing of the Torch to the Younger Generation”, a particularly poignant moment.

Every day’s packed schedule included guest textile artist presentations, which for me were particularly interesting. At this time, the artisans had an opportunity to talk about what they are doing within their communities as they move forward, how they have formulated their future plans, and how they intend to ensure that supplies will remain available and/or their deliberate return to traditional methods. They also talked about their young people and how they are tending to them and their commitment to maintaining tradition. It was humbling to listen to the effort that they are expending in keeping their creative lives meaningful for their children.

The keynote addresses set the backdrop for the conference and tied the evidence that we were seeing around us to the textiles’ long and extensive history. That perspective really was essential, forcing the conference participants to take a deep breath and try to understand the magnitude of all that was around them.

The schedule included time for demonstrations and workshops every day. This time clearly pointed to the unspoken theme of Tinkuy – the cross pollination of ideas and techniques. This happened at so many levels – from one culture and/or village to another, from one specialty to another, from one fiber-type to another, from one country to another – and it was all truly magical.  People had come from many villages within Peru, as well as other countries within South America, such as Ecuador, Bolivia, Chile, Argentina, and Brazil. Traditional artists from Guatemala, Mexico, the United States, Canada, Afghanistan, India and Laos also attended.

People gave so much of themselves, often with so much thankfulness. Sometimes the gift came in the form of a song, sometimes in the form of a dance. Tinkuy 2017 was a special time of color, textiles, dance, music, learning and inspiration. Thank you CTTC and ATA!!

Thanks Teena for sharing your wonderful experience with all of us!

2 thoughts on “Tinkuy 2017: A Gathering of Textile Arts in Cusco”